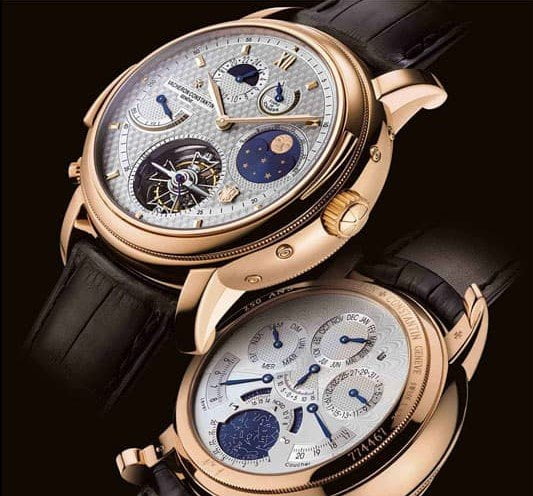 Top 10 Most Complicated Timepieces in the World Part 1

Top 10 Most Complicated Timepieces in the World Part 1

Complications – also considered as displaying mechanisms on any Luxury Watch. Thus, some complications like the hour, minute, and seconds, are taken for granted. While others are so rare and also so difficult to manufacture them, as to be considered “Grande Complications”.

Therefore, a timepiece complication represents any function that does more than telling the time. Generally speaking, the more complicated a watch, the more esteemed its maker.

Therefore, there are three categories which can describe a complication:

Top 10 Most Complicated Timepieces in the World

In the first place,  A. Lange & Söhne introduced the 1815 Grand Complication back in 2013. Although, this watch also become one of Lange’s most complicated Luxury Watches – especially in terms of functionality. This watch features an array of complications. But these complications include but are not limited to grande and also petite sonnerie, split-seconds chronograph or a perpetual calendar.

Nevertheless, many experts consider the Chiming Mechanism (The Grandesonnerie) as one of the most challenging of all complications in watchmaking. Not to mention that there exist only 25 watchmakers worldwide who know how to render this complication. Also, this is the first time A. Lange & Söhne developed such know-how.

For instance, this watch possesses a Handwound ‘Grand Complication’ movement. Moreover, the readily visible chronograph-rattrapante mechanism merely suggests the overall complexity of the movement. Thus, the grande sonnerie and also perpetual calendar mechanisms are located beneath it, largely concealed. Hence, all moving parts are lavishly finished by hand. Particular emphasis is placed on levers, rockers, and also springs, come black-polished by the finishers. Correspondingly, the latter polishing steps alone require more than a month of manual work. Endowed with solarisation, the mainspring barrel provides a power reserve of 30 hours.

Of course, the grande sonnerie is especially daunting for the watchmaker. He is not only responsible for precisely adjusting the switching sequences of the individual parts but also for the richness of the sound. Tuning is performed exclusively by hand and “by ear”. The grand and small strikes automatically indicate the time in quarter-hour intervals. When the slide at 8 o’clock is actuated, the minute repeater will indicate the time to one-minute accuracy. The acoustic time is mechanically sampled from three so-called snails in the middle of the movement. The low-pitched tones indicate the hours, the high-pitched ones the minutes and the double tones the quarter-hours. The striking mechanism has its own spring barrel, which delivers enough power for 24 hours.

Top 10 Most Complicated Timepieces in the World – A. Lange & Söhne Grand Complication 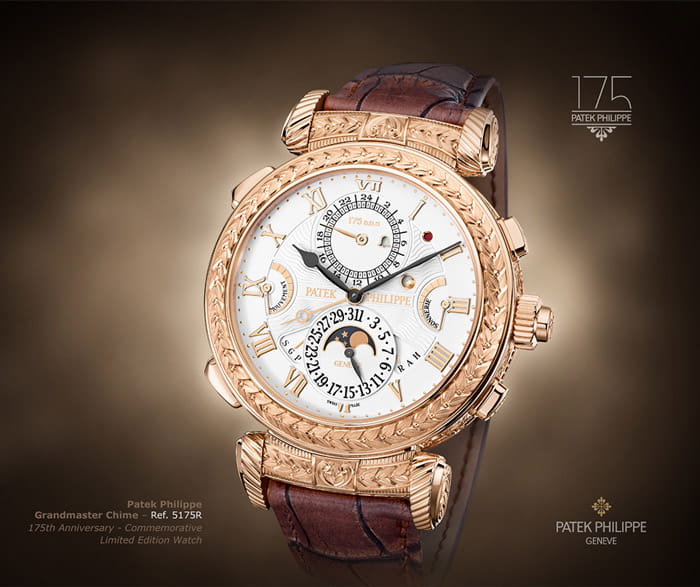 Nevertheless, this watch presents itself as the most Complicated wristwatch Patek ever made, with more complications (20), more size (47.4 x 16.1 mm) and also more kites (4) plus brand reserve for sonar 30 hours). The watch box is made out of 214 pieces, the caliber possessing 1,366 pieces and 108 rubies.

As a matter of fact, the double barrels possesses enough energy for the minute repeater, which if activated gives the hours and quarters of an hour in addition to the minutes that have passed since the last quarter of an hour. Thus, the alarm reproduces the entire repeater sequence of minutes. Not to mention that this complication had never been present in a wristwatch.

When activating this function, with the help of a button, the clock reproduces the date in intervals of ten days with a double high / low blow and the days with a high blow. That is: to mark the 24th of the month the clock would do: ding-dong and then ding-ding-ding-ding.

Notably, the calendar sphere features four sub spheres arranged around the four-digit digital year. Therefore, the month presents at 3 o’clock, the date and the leap years presents at 6 o’clock and the day of the week at 9 o’clock. Also, the time appears at 12 o’clock in the subspace of 24 hours and 60 minutes. Except for the digital year, the whole calendar moves instantly and at the same time. The date also appears on the other side of the clock, in the sphere of the lunar phases. Almost everyone’s opinion, the face of the watch is the most beautiful part of the watch. 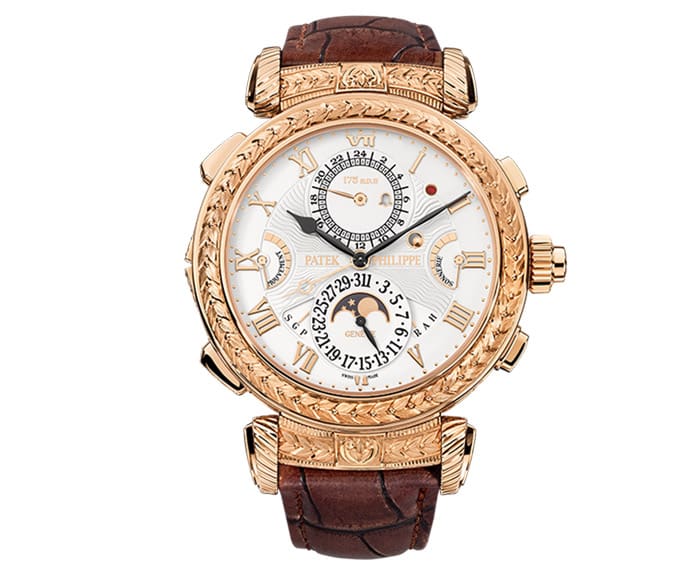 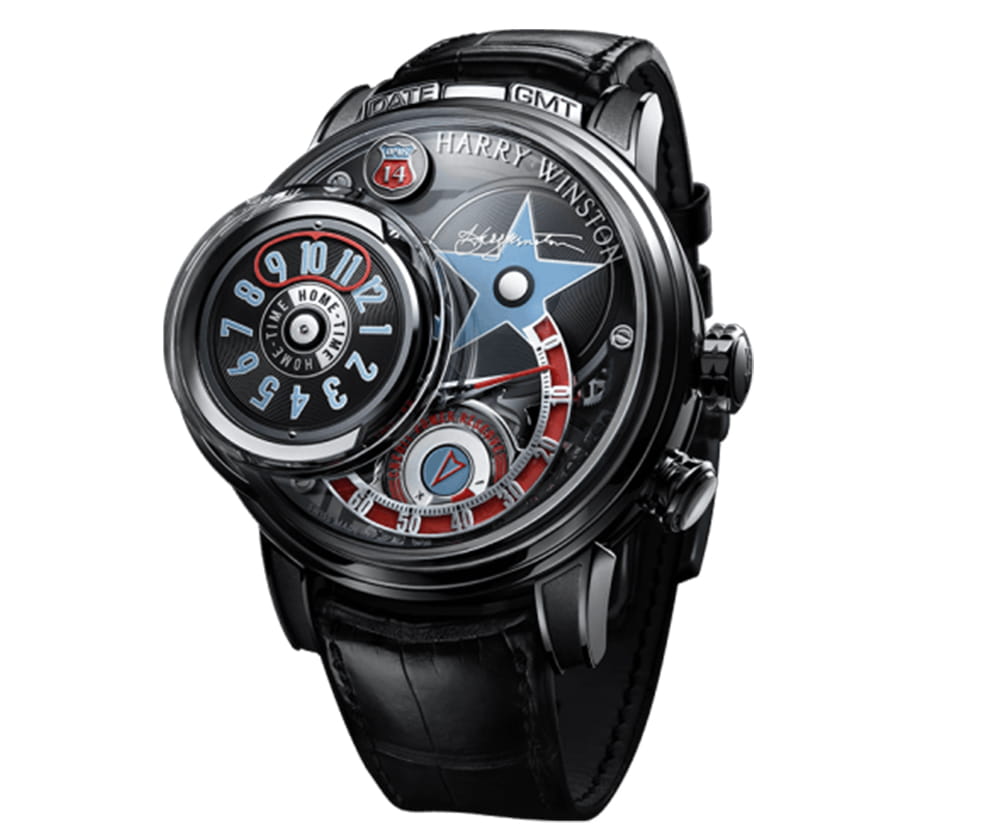 Nevertheless, Opus 14 made by Harry Winston represents first and foremost a human journey. But, this journey began in 2001 in collaboration with more independent watchmakers. Moreover, all the time this watchmaker imagines new models that defy the laws of innovation and also the way time is read. Not to mention that it is a journey that Harry Winston shares with the most passionate collectors of extraordinary pieces.

In 2015, Harry Winston Timepieces also wrote their fourteenth chapter in this unique saga. Thus, by partnering with Franck Orny and Johnny Girardin, two visionary watchmakers, the brand provided an exceptional chance to push the limits of the imagination even further. Yet, it all began with a blank slate on which to design a totally original timepiece. The Codename: Opus 14. Opus 14 combines the best mechanical innovation with a remarkable playfulness.

As a matter of fact, the model’s silhouette presents itself as an ensemble of visual surprises brought together beneath a sapphire crystal cut from a single block and housed within an 18K gold case measuring 54.7 mm in diameter. Because of its design and automaton complication, this new creation evokes a jukebox, where the mechanics have been miniaturized.

As a result, the soul of the Opus 14 is shaped by each of its details:

Nevertheless, all these elements recall the rock ‘n roll era and also the emblematic diner aesthetic, as well as the legendary Route 66. Not to mention that this spirit also infuses the presentation case, itself inspired by a jukebox. 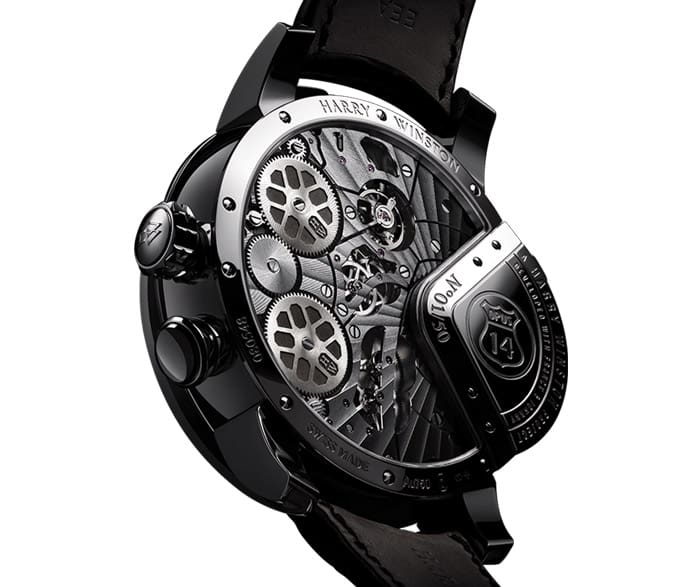 Calendar by disk – on demand.

GMT by disk – on demand.

Movement power reserve by the aperture.

Case Back: Open, made also from sapphire crystal

Also, you can find out more about this watch Here

In fact, it is the first IWC watch featuring a patented constant-force tourbillon together with many other complications and individually calculated astronomical displays.

In this case, the watch possesses also a special exclusivity for each of its customers. Thus, Every Portuguese Sidérale Scafusia timepiece will be made on a special request and it will be unmistakably unique.

Notably also for this watch is that Portuguese Sidérale Scafusia, unlike most mechanical watches, has displays on both sides. Moreover, its dial design possesses the same characteristic style as the entire IWC Portuguese watch family.

In fact, the contemporary dial on its central part features the globe of the world with engraved lines of latitudes and longitudes. Moreover, considering the fact that there are two types of days that differ in length, a solar and sidereal time, IWC provided the readings of both. Thus, the solar time is based on the length of the average day that lasts precisely 24 hours and measures the average time between the passages of the sun over a given meridian.

On the other hand, a sidereal time measures the time taken for the earth to complete the rotation around its own axis. Considering also the fact that the earth also describes an arc around the sun, a sidereal day is approximately four minutes shorter than the solar one. Therefore, on the dial side of Portuguese Sidérale Scafusia Watch at 12 o’clock position there is a 24-hour counter that shows sidereal time with outstanding precision ( the accuracy is up to +/- 11.5 seconds per year).

Also, you can find more information about this watch Here 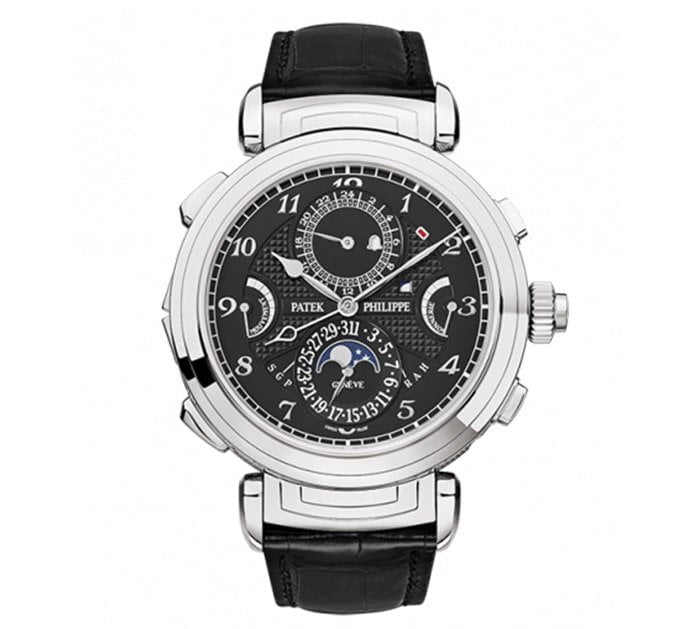 Nevertheless, the Patek Philippe Grandmaster Chime Reference 5175 with its unique hand-engraved case was the star among the commemorative watches presented on the occasion of the manufacture’s 175th anniversary in 2014. Also, it is succeeded by the Reference 6300, the first grande-sonnerie wristwatch ever added to the company’s current collection. Of course, featuring a reversible case in white gold decorated with the manufacture’s typical hobnail pattern, this opus showcases 20 complications, including five chiming modes, two of which are also patented acoustic world debuts.

Display of day and also month.

Date display (also on both dials).

A reversible case with hand-guilloched hobnail-patterned decoration, protected against moisture and also dust ingress, not water-resistant. 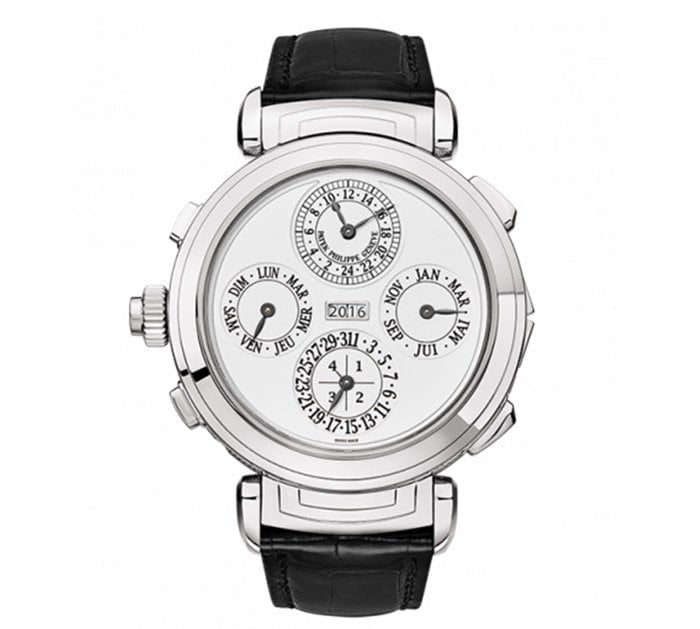 Also, Here you will find Part 2 of this article.