This Watch is Guaranteed Authentic and comes with Certificate of Authenticity, Manufacturer Serial Numbers, Original Box and Instructions manual. 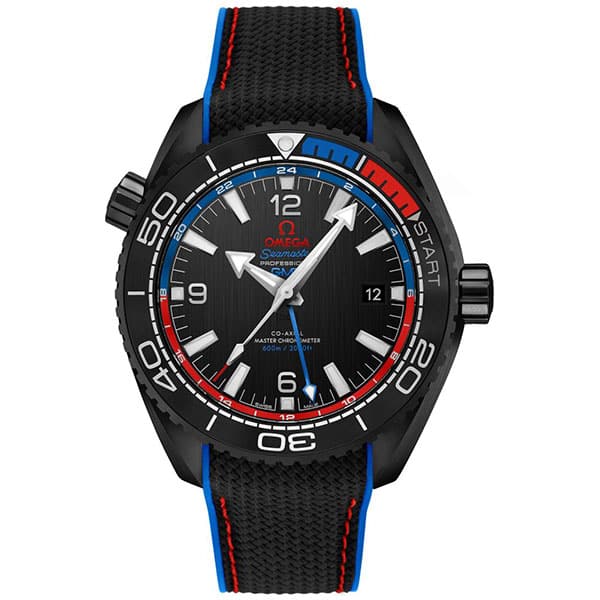 In this case, Omega launched this watch back in 2016. Also, with Seamaster Planet Ocean “Deep Black”.  Also, Omega extends its ceramic expertise, exploring the dark side of the ocean. Moreover, this represents an extraordinary 45,5 mm case watch, which combines the GMT function with a remarkable 600m Deep Diver feature. In fact, it is colored totally black, representing the ocean at a depth of 300 m. Also, its glossy and brushed case comes crafted from a single block of ceramic. Furthermore, ceramic beeing the same material used also for the unidirectional bezel and the dial with its Arabic numerals.

“Team New Zealand beat Oracle Team USA and won the 35th America’s Cup with the official timekeeper, Omega, on board. The brand unveiled the Seamaster Planet Ocean ETNZ “Deep Black” in the crew’s colours to celebrate the exceptional competition.”

Although, its new GMT ring comes also fixed on the dial. Also, the diving scale and OMEGA logo on the crown comes decorated with Liquidmetal™. Notably, the hours, minutes, seconds and also GMT hands come made from 18K White Gold coated in white Super-LumiNova. As a matter of fact, OMEGA created also an oriented screw-in caseback where the engraved wording sits pleasingly into position. In fact, Omega achieved this feature through its new and patented ceramic Naiad Lock.

On the other hand, this movement comes also as a certified Master-Chronometer by Swiss Federal Institute of Metrology (METAS) and also as a COSC chronometer. It passes tests that replicate real-life wearing conditions imposed by METAS certification which tests water resistance, precision and also magnetic resistance to 15,000 gauss. Nevertheless, all prices are subject to change without notice and we ( Majordor ) reserve the right to make changes as necessary to reflect the market conditions, our supplier’s conditions and all other factors which are not under our direct control. Moreover, the retail prices shown above may represent the current replacement value of the item and are suggested as retail price, which may not reflect the selling prices. Thus, prices can vary according to the currency exchange rates and may be different than in the store. So, please check up your country and currencies for delivery. In fact,Omega is a registered trademark of Omega SA. Thus, Majordor is not an authorized dealer for Omega and also in NO WAY affiliated with Omega SA or Omega USA. Equally important, all Omega watches sold through Majordor are delivered in UNWORN condition.