This watch is Guaranteed Authentic and comes with Certificate of Authenticity, Manufacturer Serial Numbers, Original Box and Instructions manual.

In this case, Omega launched this watch back in 2016. Also, with Seamaster Planet Ocean “Deep Black”, Omega extends its ceramic expertise, exploring the dark side of the ocean. Moreover, this represents an extraordinary 45,5 mm case watch, which combines the Chronograph function with a remarkable 600m Deep Diver feature. In fact, it is colored totally black, representing the ocean at a depth of 300 m. Also, its glossy and brushed case comes crafted from a single block of ceramic. Furthermore, ceramic beeing the same material used also for the unidirectional bezel and the dial with its Arabic numerals.

Notably, the hours, minutes and also seconds hands come made from 18K White Gold coated in white Super-LumiNova. As a matter of fact, OMEGA created also an oriented screw-in caseback where the engraved wording sits pleasingly into position. In fact, Omega achieved this feature through its new and patented ceramic Naiad Lock.

Special version of the column wheel, co-axial caliber 9300 for use in gold watches.

Yet, this watch comes as a Column-Wheel Chronograph – its column wheel is visible from the transparent case back. Moreover, the movement features Omega’s “Si 14” silicon balance spring, which contributes to the movements outstanding resistance to shock, environmental disturbances and also to the watch’s chronometric performance.

The movement also features the now-standard Co-Axial Escapement which contributes to greater precision, stability and also durability. Although, the Co-Axial escapement possesses less friction and also reduces the necessity of lubrication, reducing the time required between servicing. In fact, the combination of the SI 14 balance spring and the Co-Axial escapement makes for an extremely reliable and also stable movement. Also, the rotor and its visible bridges come decorated with a unique “arabesque” wave design finish. 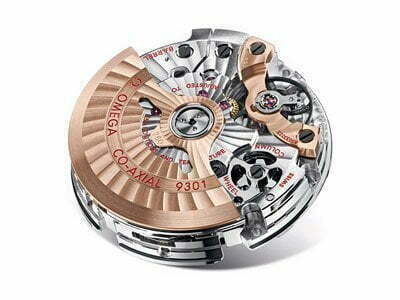 Nevertheless, all prices are subject to change without notice and we ( Majordor ) reserve the right to make changes as necessary to reflect the market conditions, our supplier’s conditions and all other factors which are not under our direct control. Moreover, the retail prices shown above may represent the current replacement value of the item and are suggested as retail price, which may not reflect the selling prices. Thus, prices can vary according to the currency exchange rates and may be different than in the store. So, please check up your country and currencies for delivery. Also please check the payment terms and acceptance here. In fact,Omega is a registered trademark of Omega SA. Thus, Majordor is not an authorized dealer for Omega and also in NO WAY affiliated with Omega SA or Omega USA. Equally important, all Omega watches sold through Majordor are delivered in UNWORN condition.